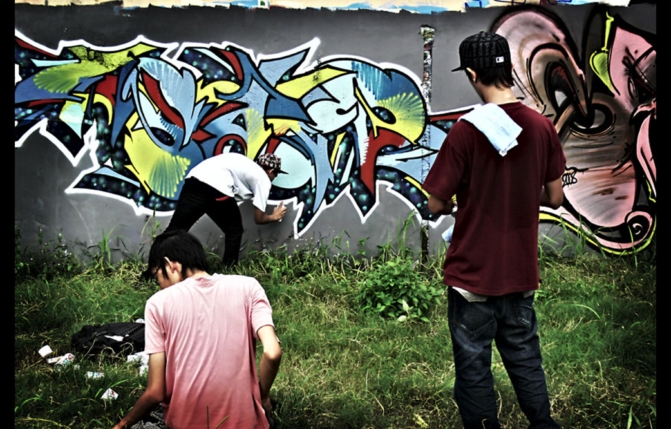 
Well I used to, sort of. See, I'm from Bristol, and I was also involved in graffiti. Is he in the pub at the moment? He shakes his head diffidently. He is not sure he would recognise him and if he did manage to point him out, thinks he could get into trouble.

I tell him that I'm here to interview him. He doesn't believe me - Banksy doesn't do interviews. But he has agreed to one this time, though he laughs when we suggest a photograph. Banksy is Britain's most celebrated graffiti artist, but anonymity is vital to him because graffiti is illegal. The day he goes public is the day the graffiti ends. His black and white stencils are beautiful, witty and gently subversive: policemen with smiley faces, rats with drills, monkeys with weapons of mass destruction or, when the mood takes him, mass disruption little girls cuddling up to missiles, police officers walking great flossy poodles, Samuel Jackson and John Travolta in Pulp Fiction firing bananas instead of guns, a beefeater daubing "Anarchy" on the walls.

He signs his pieces in a chunky, swirling typeface. Sometimes there are just words, in the same chunky typeface - puns and ironies, statements and incitements.


At traditional landmarks, he often signs "This is not a photo opportunity". Come back a few days later, and people will have obediently tagged the wall. Banksy has branched out recently - he designed the cover of the Blur album, Think Tank, and tomorrow is the opening night of Turf War, his first gallery show in Britain. He is somehow managing to straddle the commercial, artistic and street worlds. It is easy to become addicted to his work. Since spotting my first few Banksies, I have been desperately seeking out more. 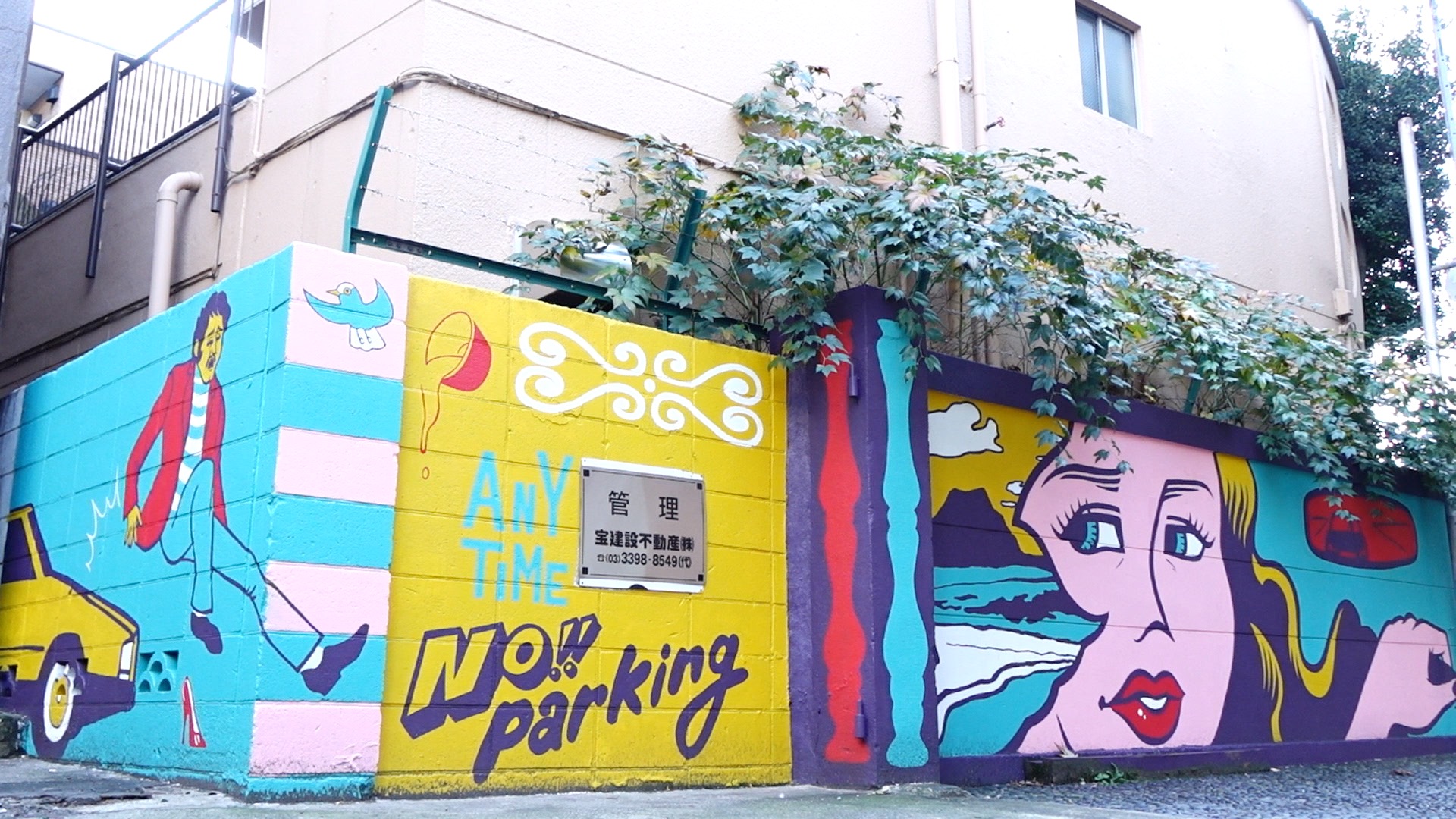 When I do come across them, surreptitiously peeping out of an alley or boldy emblazoned on a wall, I find it hard to contain myself. They feel personal, as if they are just for me, and they feel public as if they are a gift for everyone. They make me smile and feel optimistic about the possibilities of shared dreams and common ownership. On the Banksy trail I meet lots of devotees. They tell me how he comes by stealth in the night, how he has look-outs posted while he works, how his first exhibition will be in a warehouse though only the number of the road is known and not the road itself.

They say that Banksy has customised the city, reclaimed it, made it theirs. There is still no sign of him. I walk into the street to phone Steve, his "agent". I have the strange sensation of hearing him in stereo.

I look up the road, and see a man 40 yards away talking into the phone. Steve doesn't look like an agent.

Actually, he says, he is Banksy's friend and takes photos for him. Two minutes later they arrive in the pub. Bansky is white, 28, scruffy casual - jeans, T-shirt, a silver tooth, silver chain and silver earring. He asks if he can nab a cigarette and orders a pint of Guinness. There is something on his mind.

He tells me how he noticed that a piece of his graffiti has been papered over by a poster advertising Michael Moore's Stupid White Men - a bestselling book about how to subvert the system. It's a weird world, a sick world.


He is one of the most important contemporary artists working today, with exhibitions all across the world. JR at work in Los Angeles. Having begun as a graffiti tagger on the streets of Paris in the late s, JR has gone on to reach the pinnacle of artistic achievement, winning the TED Prize in , the Gordon Parks Foundation Award just last month , and receiving front-page coverage for his New York Times magazine collaboration in April Women are Heroes: Train passing, Kibera, Kenya, After winning over his native city, JR has taken this potent mix of documentary photography, public artworks and activism to incredibly diverse communities across the globe, from war-ravaged west Africa, to the Indigenous tribes of North America, as well as groups in Palestine, Pakistan and Phnom Penh.

In some instances, his art has addressed specific problems, such as child deaths in drone strikes along the Afghan-Pakistani border. Other works have served simpler, more prosaic ends. His Women are Heroes images, installed onto the roofs of slum housing in the Kibera district just outside Niarobi, were printed on vinyl sheeting, effectively waterproofing the homes. In every case, JR has broadened the conventional remit of fine art, attempting to bring about positive social change with his work, whether it is via a guest commission from the New York City Ballet, a speaking engagement at the Aspen Ideas Festival, or in the pages of this book.

The artist has worked closely with the design and editorial team at Phaidon to produce this comprehensive overview. Fisherman, Mangochi, Malawi, Since this book is volume one of a series, what can readers expect from volume two? The next two volumes will come out much more quickly since I have the images and information needed but I wanted to put a line in the sand, so I broke it into volumes so that I could finish and put something out.

Readers can also expect another city to join.

I am writing the next book on Flint. I have spent a considerable amount of time in Flint, MI this year. The grant restricted the artists to be all three—Louisiana born, raised, and based—which was a challenge. There is something very special about Flint and over pieces have been put up since May to shift the dialogue from poor, corrupt, unhealthy, dirty and uneducated to colorful, vibrant, communal, creative and real, and I am happy to support that movement with my event planning and visual storytelling skills.

I plan to bring Flint to New Orleans in the next year and looking for a wall now. I plan to look at the bigger picture soon and am applying for a research grant at Tulane to look at the American South. We have real gems in the region in Texas, Alabama, Mississippi, Tennessee, and surrounding areas. I want to get the artists, administrators, curators together for a long weekend in NOLA and offer a panel-style walking tour and demonstration-style conference.

For , I am working with Hebru Brantly who is originally from Chicago, but I discovered while in Detroit at Murals in the Market to do both sculpture and murals; Los Angeles-born Tom Fruin on his first traveling and temporary piece his iconic water tower added to the NYC skyline ; street artist David Zinn also Michigan ; and on public art projects with Chakaia Booker and Isaac Cordal. A lot has changed since I was that lost, little girl in upstate New York nerding out over math and art, trying to make sense of the world around me and do so by using outdoor art to make the world a more comfortable place.

I am happy since I now get to see the world differently and have come at this movement from the inside out. For more information on Kady Yellow, click here. Event Search.